In Bangladesh, fish plays a central role in dietary patterns, livelihoods and culture. Fish is by far the most commonly consumed animal-source food across all population groups, at an average of 19.71 kg/person/year. Fish is an important diet staple, providing a rich source of micronutrients and accounting for 60% of animal protein intake. Research shows that increasing fish consumption and dietary diversity can affect significant developmental changes.

In 2014-15, 83,524 metric tons were exported, more than half of which were shrimp. Around 18.2 million people are employed in fisheries and aquaculture.

US investment to boost the Bangladesh aquaculture sector

Since 1989, WorldFish has been working with the Bangladesh Government and development partners to create a more productive fisheries and aquaculture sector that contributes to diversified and resilient rural livelihoods and promotes food and nutrition security.

Aquaculture for Income and Nutrition (AIN)

The effect of daily consumption of the small fish Amblypharyngodon mola or added vitamin A on iron status: a randomised controlled trial among Bangladeshi children with marginal vitamin A status 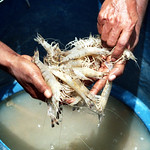 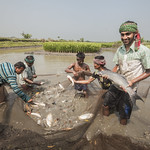 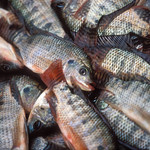